What Is Hole Stories?

Hole Stories is a compilation of travel advice for someone that wants to travel the world for as long as possible for as little money as possible.  This is not a website with hotel recommendations.  This is a website all about why you should skip the hotel and find a local to talk to!  If you need a hotel  with any stars, feel free to close your browser now… If you want to save money, see the world, and have the time of your life in ways that people have a hard time even fathoming, then please continue reading!

How Hole Stories Got Its Name

When most people see a hole in something, whether it is Swiss cheese, a pasta strainer, or a pair of your favorite jeans, they automatically think of it as something missing.  In most cases, I disagree.  A hole is not what is lacking, but rather, tells a story.

The holes in Swiss cheese are the air bubbles that form when the delicious dairy product is in the process of its metamorphosis.  The holes in a pasta strainer are there for a specific purpose and without them, it would no longer live up to its name.  And each hole in your favorite pair of jeans tells a short story of something that happened in your life… If you were to gather up all the silly little stories from how you got the holes in your jeans, it would no longer be just an article of clothing, but rather, an article of the story of your life.

My favorite pair of jeans have many holes in them.  I not only love these jeans because they fit like a glove, look pretty amazing, and are perfect summer jeans because they have fantastic ventilation, but because they remind me of where I’ve been in the world and what I’ve accomplished and I wear them with pride!

Some holes were formed due to not-so-exciting reasons like accidentally poking myself with a knitting needle while knitting a hat.  Some holes were formed due to extreme-nerve-racking situations such as crashing my motorcycle while driving across the U.S..  And then, of course, there are all the holes of circumstances in between.  Whatever the case may be, each one is something that reminds me of what makes me who I am today.

Hi.  I’m Lindsay.  Lindsay Summers.  I am a math dork, brutally honest, a chaotic perfectionist, an extroverted introvert, pessimistically optimistic, a debate queen, lethargically energetic, spontaneously organized, and someone that will not back down if it means compromising my morals.

I have been called “a walking contradiction” due to the diversity of my interests combined with my personality.  I’m a “people person” that likes to be/travel alone, I hope for the best but prepare for the worst [simply, realistic], I ride my motorcycle all day and then come home to knit, I do logic puzzles and math problems to relax before dancing all night, I pinch pennies and use coupons on a daily basis so that I can spend major money having fun and traveling the world, I exercise often and eat healthy so that I can enjoy huge burgers and dark beer …  If you think you’ve “figured me out,” then you haven’t known me long enough.

Where On Earth Is This Person From?

I’m originally from Long Island, New York.  For those of you who are not familiar with Long Island, let me paint you a picture…

Most Long Islanders buy fancy cars, 85 pairs of designer sunglasses, and new outfits just about every other day to go partying out in the Hamptons.  You can not repeat an outfit because pictures are taken every night and God forbid there’s two pictures of you on two different nights with the same outfit!  A summer day consists of laying on the beach all day working on a tan and making plans for later that night, going straight to the mall to pick up new outfits, go home to shower and eat, then go out partying in the Hamptons all night until the next morning…  For girls, the more we went out, the less we had to buy drinks – social networking can be very effective.  Then the next day, we did it all over again.

Well, ok ok, sorry…  It’s unfair to say that we only partied in the Hamptons and other high class places on Long Island – that’s not true.  New York City was just a short ways away whenever we were too bored with the people in the Hamptons.  And when the party scene itself was a bore to us, there was always the last resort of hanging out at Starbucks and making guys meet us there just to be our own personal entertainment.

Now I was fortunate to be introduced to traveling at a young age.  I come from a family of teachers so we traveled every summer – mainly to Europe.  At about 13 years old, I was told that I could take some friends [if I wanted to] to anywhere I wanted in Europe.  Eh, ok… sure, why not?  So I started asking my friends if they wanted to travel with me to somewhere in Europe… anywhere…  So, do you want to join?

I could see my friends, through their designer shades, looking at me like I had three heads as they said to me in all seriousness “Umm, I have the beach, the mall, my mommy’s credit card to buy pretty clothes every day, and New York City… why would anyone want to leave this?” as they went back to tanning and rubbing on more oil.

At about 16 or 17, I started to think where I would like to go to college.  I had absolutely no idea.  While everyone else my age was looking at colleges on Long Island and upstate [New York], I came to the conclusion that I would look elsewhere; I wanted it to be the exact opposite of Long Island.  I figured if there are TV shows on MTV about girls living exactly how we were living, it’s not because the public is jealous – it’s because they’re making fun of us.  If it’s on MTV, it’s not “real life” and if I couldn’t tell the difference between a TV show based on craziness and my own life, then something needed to change.

In 2001, I visited West Virginia University, looked around, and talked to people.  I discovered adults in overalls; they informed me that when they’re bored and need something to do, they go to Walmart.

My younger brother was with me and I could see his eyes bugging out of his head when he saw and heard this.  He picked his jaw up from the floor the second the overall-wearing adults walked away, and said to me “Lindsay, for real, let’s get the hell out of here!”

Now most people who grew up where we did would think the same thing, but I am not most people.  As I laughed at his reaction, I thought “YUP! This is the definitely the ‘exact opposite’ of Long Island and this is where I’m going!”  And I did – for six years.

Time-Line Of Where I’ve Lived

I consider places of where I’ve lived, places where I’ve been for more than one season, and where I’ve had a “real” paying job. 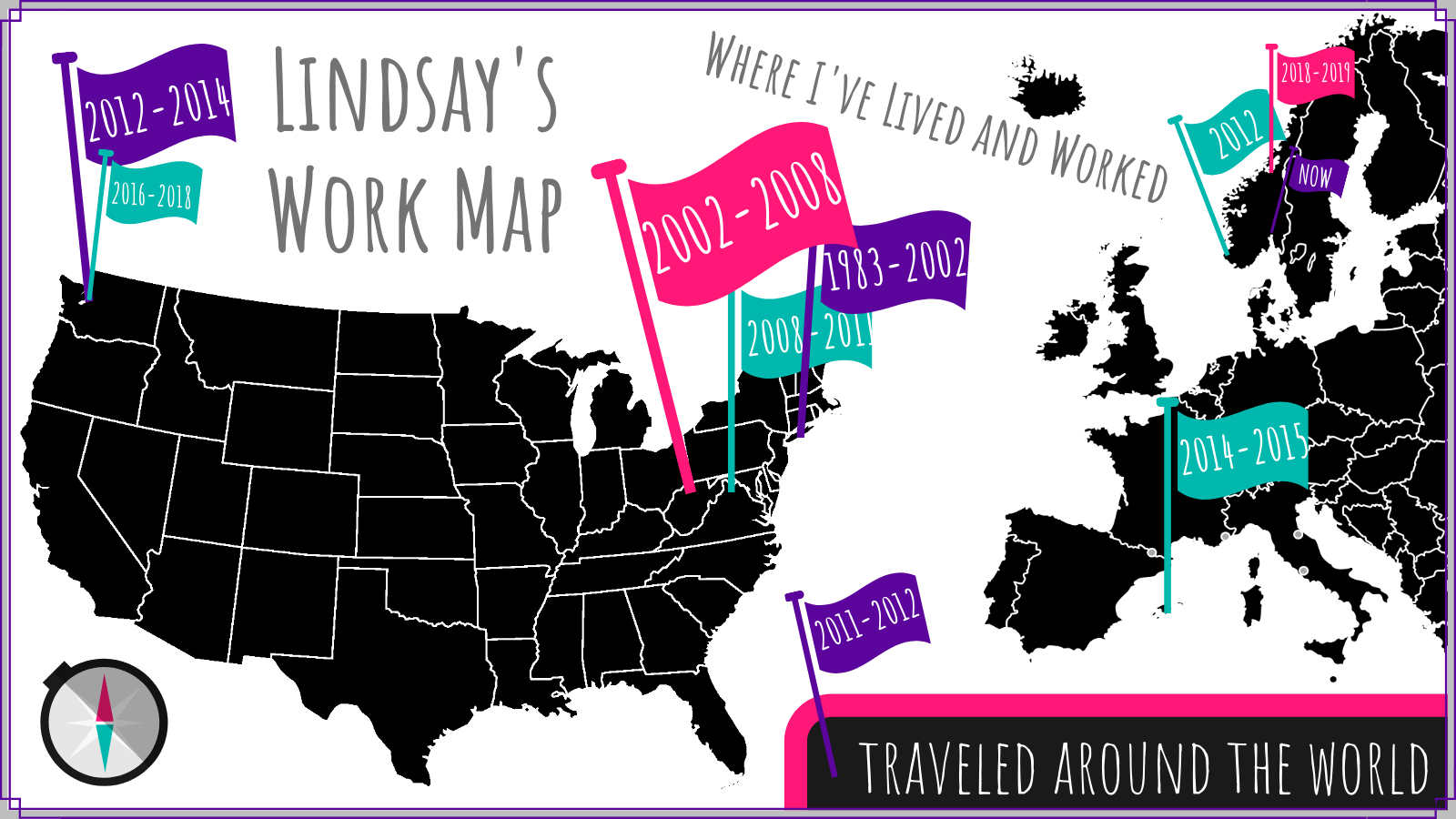