What to Do and See

Fjords. NZ’s fjords are amazing! Unlike the fjords in Norway, NZ’s fjords are covered with rain-forests [palm tress and everything]!  The glacier water and rainfall that pours off the mountains dump into the salt water… since fresh water is lighter than salt water, it floats on top which makes it really easy for trees to grow so wildly! Drive to Milford Sound and take a cruise [about 1.5-3 hours and about NZ$75 per person] to see the fjords all the way to the Tasman sea, dolphins, waterfalls, seals, rain-forests, and perhaps even a whale [with complimentary coffee/tea and maybe more].

Lord of the Rings.  NZ is home of many movies but the LOTR trilogy might be the most famous.  There are maps that you can pick up [or even tours you can take] that show specifically where on the islands they filmed.  Even though the South Island is spectacular, most of the LOTR filming was done on the North Island.  Hobbiton [where the hobbits live in the movie] is located near the real town Matamata [in the middle of the North Island].

Camping. If you’re going to camp anywhere in the world, camp in NZ – the views are amazing no matter where you go and there is virtually no wildlife that one would need to worry about.  Once you get to NZ, go to any information center or “i-site” and pick up a free camping book.

Volcanoes. NZ has a lot of volcanoes.  Auckland was basically formed entirely from volcanoes and mostly every hill you see is an extinct volcano.  There are some town that are still located over sulfur vents.  The whole town of Rotorua is steaming and bubbling from the hot activity below.

Glaciers. Enjoy a short “tramp” alone [about 1 hour] to Fox Glacier or Franz Joesph Glacier or take a longer adventure [about 6-8 hours] with a tour guide and proper equipment where you can actually walk ON the glaciers. 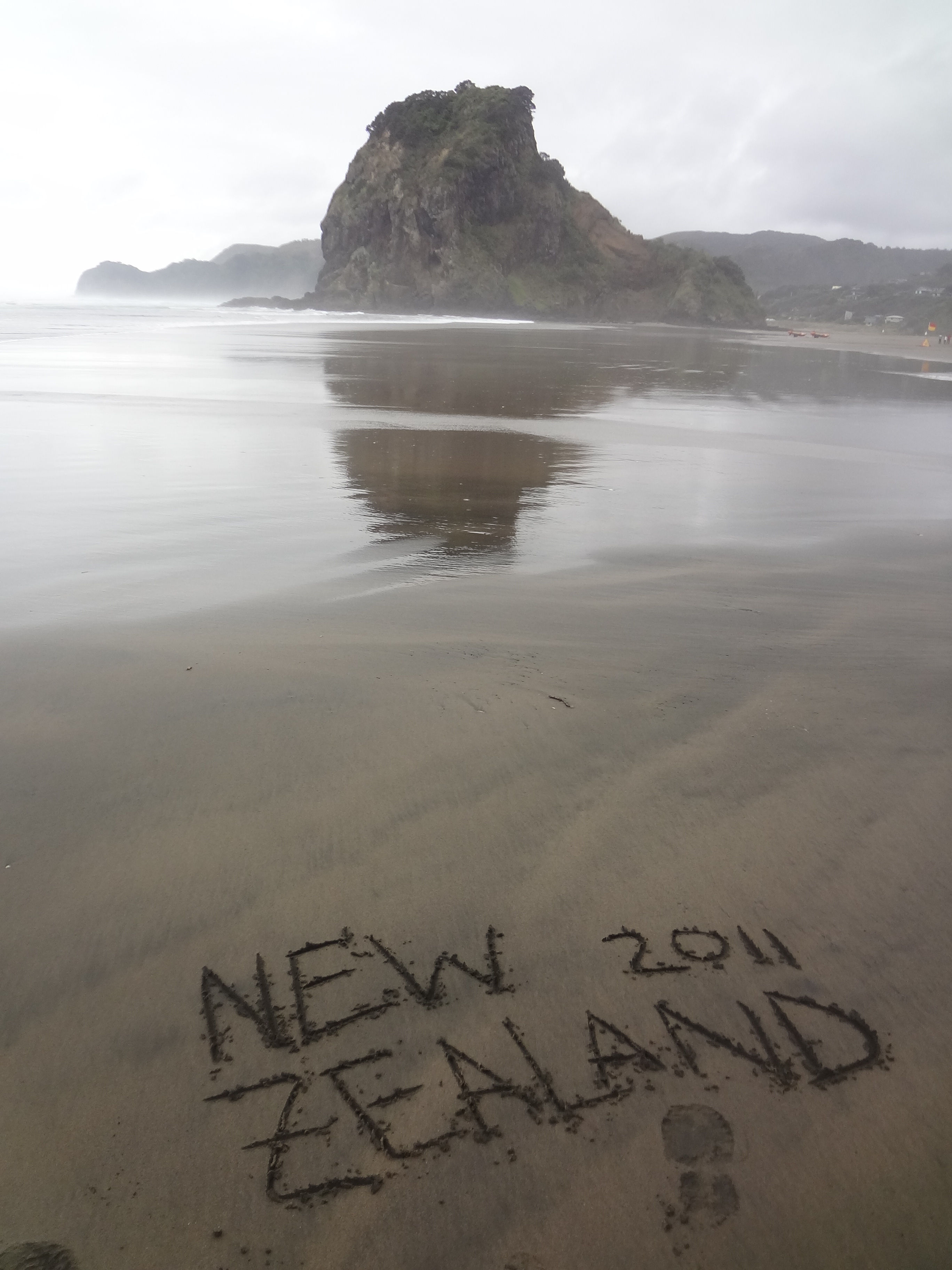 Any Adrenalin Activity. NZ has just about every heart-pumping activity you can think of: rock climbing, bungy jumping, sky diving, bungy swings, base jumping, go carts, etc… and for some reason, Queenstown has most of these activities [but usually more expensive in Queenstown].

Pancake Rocks and Blow Holes. Located on the South Island of New Zealand, this amazing and FREE attraction is really worth the visit!  Read more and check out my pictures HERE!

Mountains.  The mountains in NZ are unreal and oh so pretty.  They are a cross between east- and west-coast mountain from the U.S.  NZ mountains are snowcapped and tower overhead like the Rockies out west but are lush and green like the mountains on the Adirondack Trail.

Tramping. There are “tramps” [aka “hikes”] all over the country.  Most are well indicated from the side of the road and have an estimated walking time on the sign.  Tramps can range from 10 minutes to 4 days as well as varying difficulties.  The tramps that last more than a day have free huts on the trail.  The huts usually sleep about 12 or so people with a fireplace/stove in order to cook food.  Remember to bring enough food to last!

Hitchhiking… is super easy in NZ.

Relocation Cars.  Like to travel on a budget AND in luxury? Who doesn’t.  Read how HERE!

Driving. Be aware that driving in New Zealand is done on the LEFT side of the road so everything having to do with driving is reversed from the U.S. and most of Europe.  Read HERE about my experience with DRIVING ON THE OPPOSITE SIDE of the road and tricks I made up to help myself!

Ferry.  NZ is split into two main islands [North and South].  In order to get from one to the other, you have to use the ferry.  The most common ferry is the Interislander.  If you book online you may find it a bit cheaper, but tickets generally run at about NZ$65 per person and about NZ$118 for a car.  If you’re driving a relocation car, the car is usually free to get on the ferry but most of the time you have to pay for the passengers.  Sometimes you’re lucky enough to find relocation cars that include a ferry ticket for the driver as well.

NZ English is different than American English.  As you’re on the plane to NZ, become familiar with the following word translations in order to avoid some confused looks.  Here, I’ve complied the words that I came across in my travels that made for a relatively annoying miscommunication:

“Answerphone”=Voicemail… “You must have been busy when I called but I left you a message on your answerphone.”

“Hire”=Rent/Rental… “Do you need a hire car?” or “Will you need to hire some equipment?”

“Jandal”=Flip-Flop… You can own a nice leather sandal, but the cheap plastic flip-flops are called “jandals.”

“Kiwi” is NOT a fruit! In New Zealand, you can NOT eat a kiwi!  Kiwi’s are rare and funny little birds.  If you’re looking to eat a green-colored fruit that Americans calls a “kiwi,” you must call it a “kiwiFRUIT” [one word]. 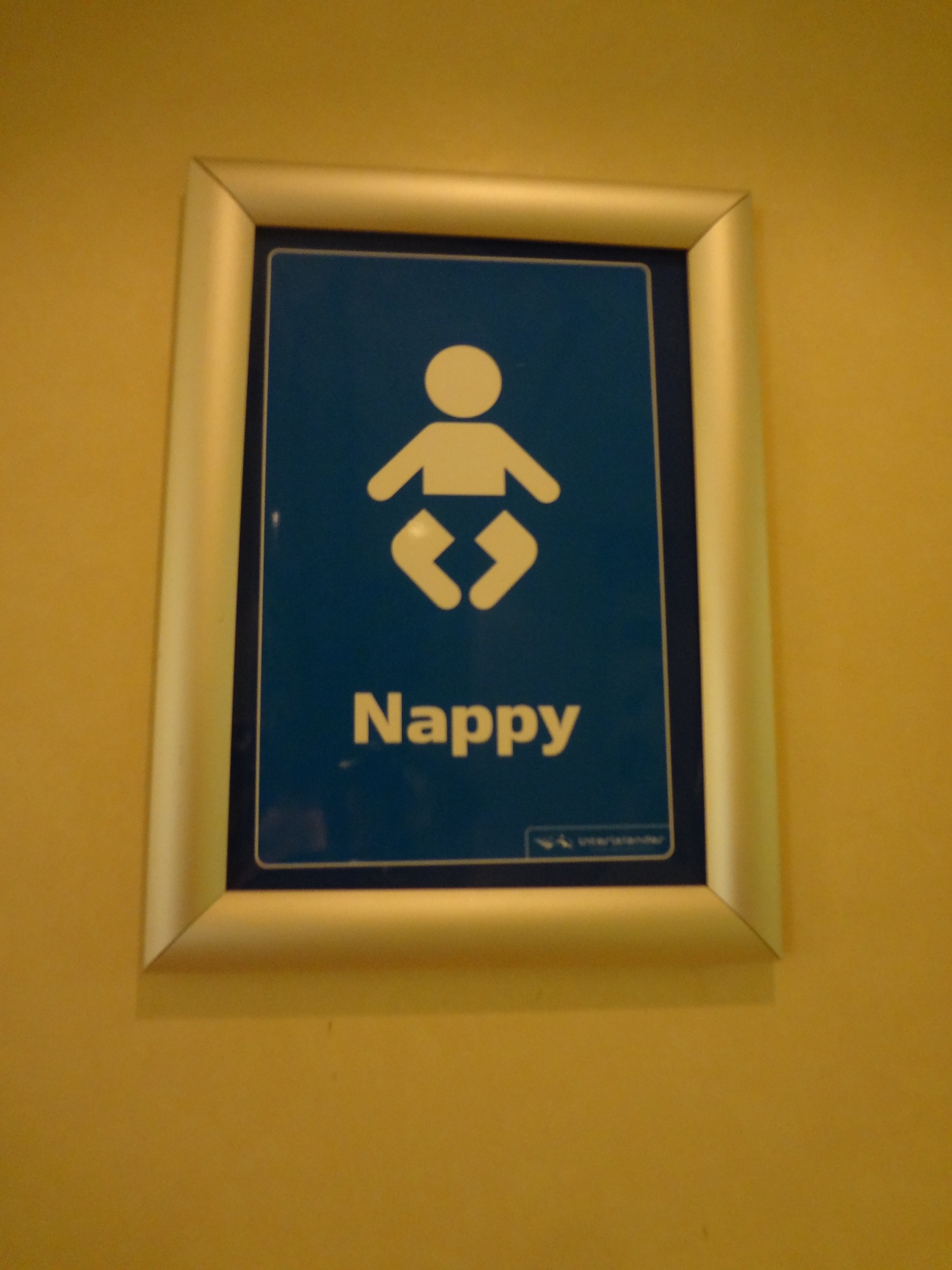 “Nappy”=Diaper… “She needs her nappy changed”

“Powerpoint”=Outlet… “Is there a powerpoint where I can charge my phone?”

“Tramp”=Hike… “It’s about a 3 hour tramp.” or “So if you like the outdoors, are you also into tramping?”

“Take-Away”=To-Go… “May I please have a take-away box for my leftovers?”

“Tea”=Dinner… “I am starving! Would you like to have tea?”

“Wee”=Little… “It’s just a wee bit farther than the next town.”

“Zed”=Z [as in the letter].  People in NZ say “Zee” if they are reciting the alphabet, but say “Zed” for the letter Z if in conversation.  For example, when giving a website name of www.example.co.nz – the ending of this website would be read as “dot N Zed”

…that NZ lies on top of two tectonic plates? …the Pacific Plate and the Australian Plate, to be exact.  If you’re familiar with plate tectonics, then this makes sense as to why NZ has so many earthquakes.  If you’re not familiar, basically the earth is shifting from underneath NZ – directly underneath NZ, actually.  The shifting causes so much friction that the land above shakes! 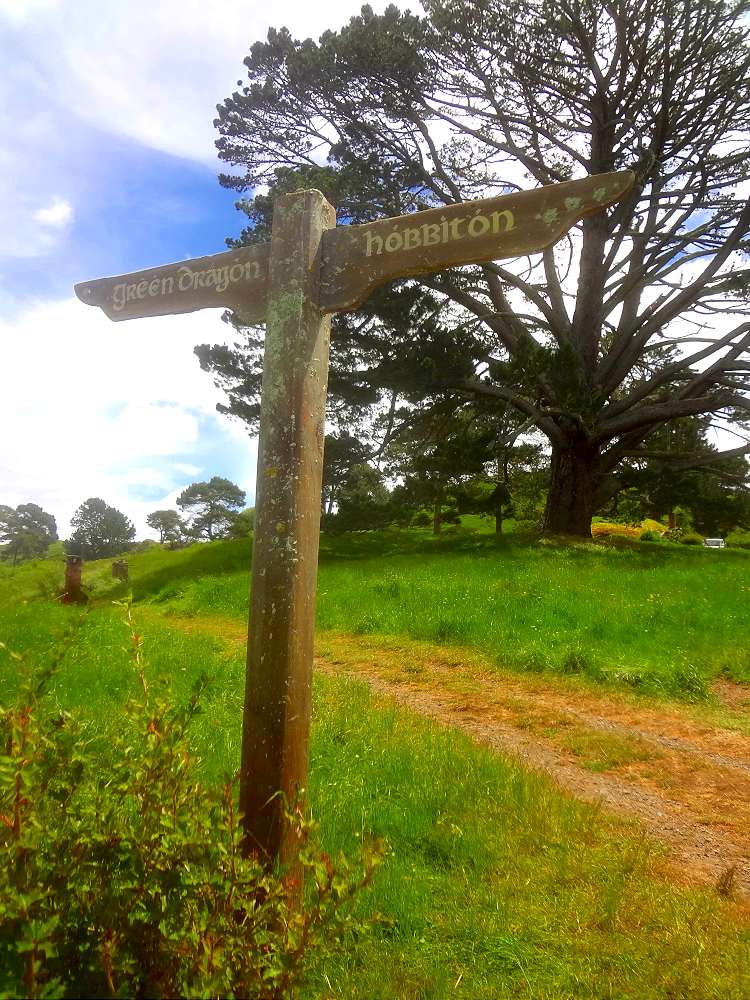 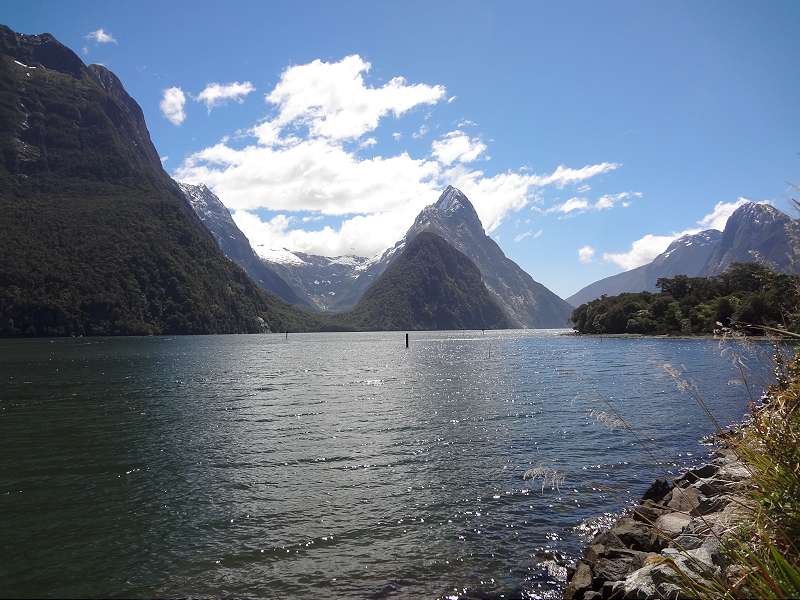 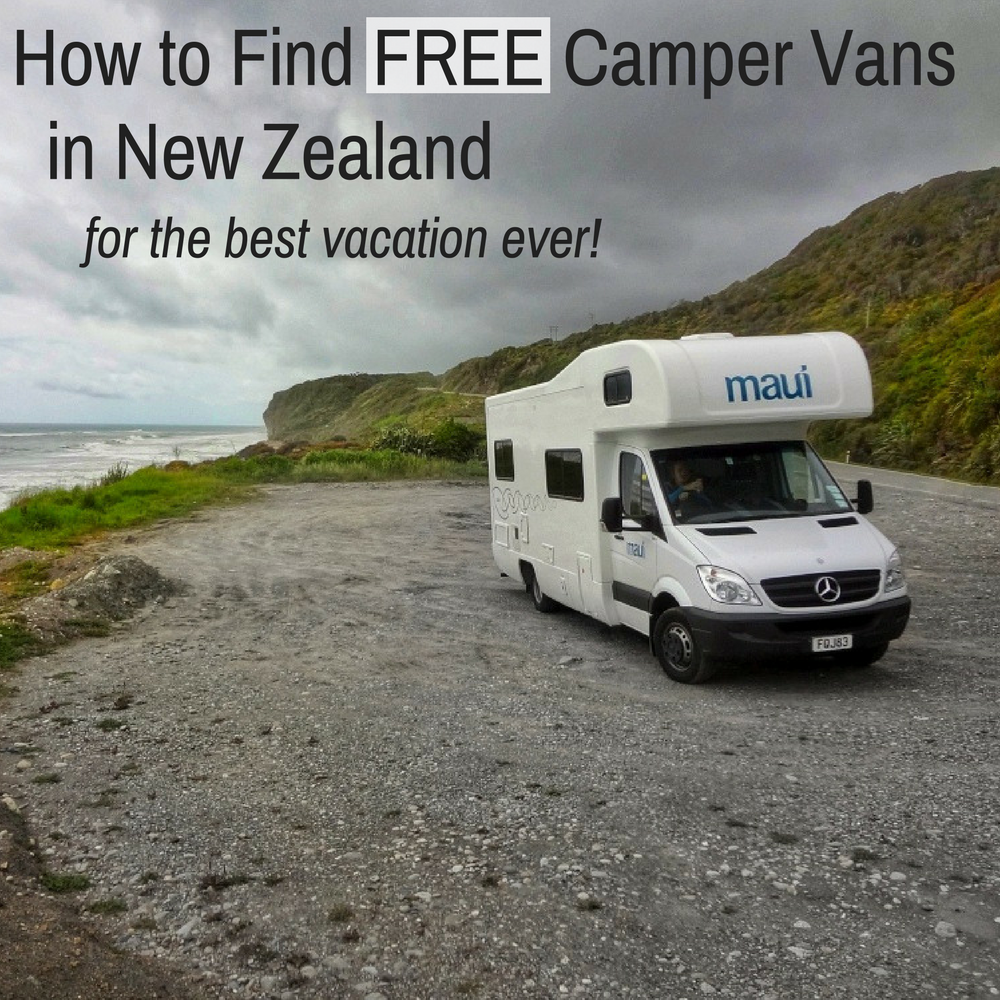 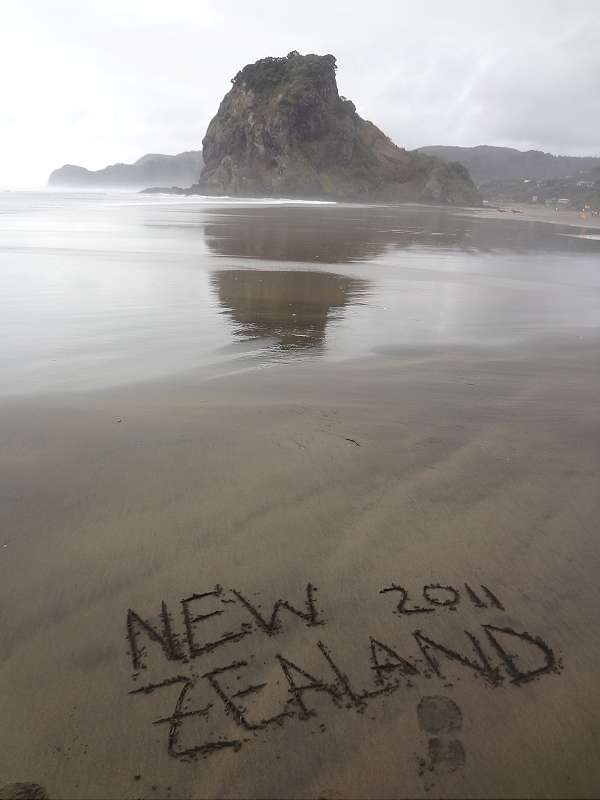