What’s interesting is that since Singapore has such a mixture of people and native languages [Malay, Chinese, Tamil, and English], Singapore has chosen English to be the official language.

WHY TRAVEL TO SINGAPORE?

If you’re looking to go somewhere, but not exactly sure where, consider Singapore; it’s a great place to travel to for a ton of reasons:
.

The Singapore Dollar.  The currency used in Singapore is close enough to the U.S. dollar, the Euro, the English Pound, the Australian dollar, and the New Zealand dollar that you don’t have to do too much math to figure out the dinner bill.
.

Cleanliness. I thought it was weird that I couldn’t find a trash can anywhere and then I realized it’s because there are so many laws that prohibit eating, drinking, gum chewing, etc. in public transportation areas.  If you’re not allowed to have food, then you’ll have no trash, right?  I didn’t agree with this at first because I had used tissues and other trash that I wanted to get rid of and was frustrated that I couldn’t find a trash can, but after having a second look around and seeing how incredibly clean Singapore is, I figured the laws and no trash can idea is working…

Aesthetics. Singapore has great architecture and art all through the streets, parks, rivers, etc.  I absolutely love how Singapore has very uncomplicated concepts and makes it into something fun and an amazing work of art.

Something as simple as the lighting can create a whole different atmosphere and you’ll find that no matter where you go in Singapore, pretty much the whole city is very pretty with great design and interesting lighting.

Language. It’s difficult to travel to countries where your native language isn’t spoken.  English seems to be spoken more and more throughout the world, but there are still some places where English isn’t common. Singapore is not one of these countries.  Since Singapore is made up of Chinese, Indian, Malaysian and other nationalities, English is the official common language of the small country.  In fact, one third of the country are native English speakers.

WHAT TO DO AND SEE

Little India. If you’re sick of cities, littleIndia is a good area to feel like you’re away from a big city.  Hostels, lots of backpackers, bars, shops, and good Indian food are what you’ll find in Little India.

Marina Bay. The main focal point in the area – stores and restaurants surround the area but there is much more to see here so just look around!

between Marina Bay and China Town

Sentosa Island. This manmade island and water park had its sand and rocks imported from other countries – weird, but interesting.

Bugis. The Bugis stop on the East West Line [Green Line] of the MRT [the train, see below] has cheap shopping.

Orchard Street. Pretty much the city center and a nice walk past all the shops (especially during December).

Orchard Street decorated for Christmas – rated the best Holiday lights in the world!

The MRT is Singapore’s train transportation.  I love the MRT – it’s fast, cheap, convenient, safe [impossible to fall on the tracks because of walls and rarely any crime commited], easy to understand the transfers, arrives often [the most I ever waited for a train was 4 minutes!], and super clean [due to all the laws, see above].  I also liked how you pay depending on the distance you travel: the farther you travel, the more money the ticket is.  This is nice if you only want to jump to the next station or two… unlike in New York City where each trip, regardless of distance, costs over $2.

The price varies depending on which stop you wish to go to, but another options are the day passes.  A 1-day pass is S$18: S$8 is your travel expenses and S$10 deposit you’ll get back upon return of the card.  A 3-day pass is S$34: S$8/day plus the S$10 deposit.  If you think you’ll use more than S$8 per day traveling, then it’s worth it to get the day pass.  I opted out of this option since I used about S$6 per day traveling back and forth.

WOW Hostel. Located in the Red Light District of Singapore and right next to the Aljuined MRT station.  I rarely like hostels, but this one really was great.  WOW Hostel has unlimited internet, two pillows and a cozy comforter, you don’t need to hassle with the sheets yourself [they make your bed for you like in a hotel], and EVERY bed has it’s own outlet and night light.  A lot of hostel don’t provide a blanket, a pillow, and there might be a few outlets in the common room to share amongst all guests.  The price for a dorm room is S$18 [about US$13] and a private room is S$50.

InnCrowd Hostel. Located in Little India and a few blocks from the Little India MRT station.  This hostel is average for bed accommodations, but surpasses all others with the common room downstairs.  A small open kitchen, computers, beanbag chairs, books, and more make you feel super comfortable and relaxed.  There are other hostels in the area for around the same price, but everyone goes to the InnCrowd to hang out and relax.  S$20 includes unlimited WiFi, breakfast, discount offers downtown, and free guided tours on Tuesdays.

WHEN I WAS THERE

Elephants. The Elephant Parade has taken over Singapore! For November 2011 through January 2012 only, Elephant art pieces are scattered throughout the city to raise awareness about the endangered elephants.  Each statue elephant is uniquely painted.  Pick up a map of where each elephant is throughout the city.  CLICK HERE to see all the elephants I found when I was there :)

New Year’s Resolutions!  When I was there for the holidays, the city was hosting a fun event in which white beach balls and black markers were provided and the people on the streets were asked to write a New Year’s resolution, a wish, or whatever else they might want to write.  The city then took this black and white beach ball and threw it in Marina Bay, put colorful lights on it, and shot fireworks from the center of the bay for the 2012 countdown.  The bay looked like a giant colorful bubble bath!  It’s so fun and so great to involve the locals and tourists into one huge centerpiece!

NOT TOO FAR FROM SINGAPORE 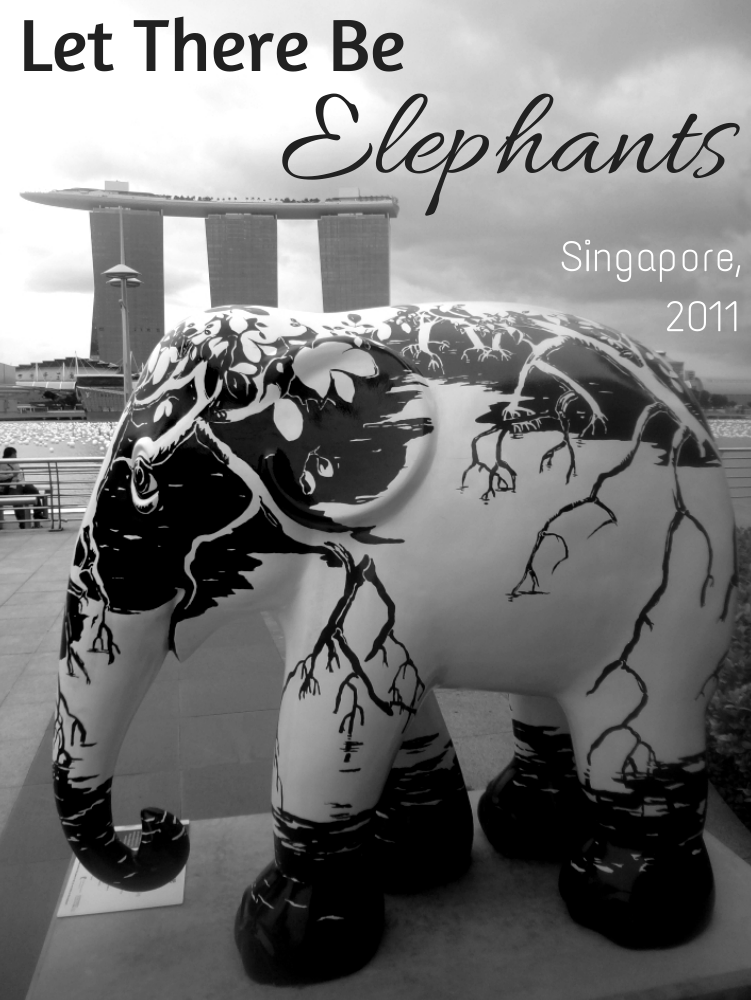 Let There Be Elephants
Singapore